Out of curiosity (which btw is one of my main driving factors in life), I bought a couple of rotary encoders. A rotary encoder is a knob that turns in small steps. It has no minimum or maximum turning angle – you can turn it as many turns you want. They are often used in radios or stereos or in any device where you use a knob to select items in a menu, for instance. 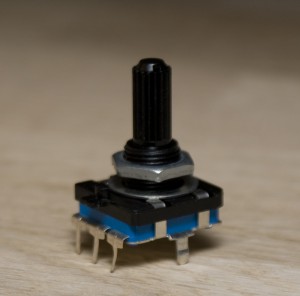 The ones I bought, have four connections: ground, +5 volt, two output connections. By reading the output signals, it’s possible to distinguish between clock-wise and counter-clockwise rotations. To understand how these output signals really work, I had to use my oscilloscope.

So I hooked up power to the rotary encoder, and connected the output pins to my oscilloscope. On the oscillators output screen I’ve moved the signals vertically a bit to make it easier to distinguish between the signals. Really they are both at exactly zero volts or exactly five volts. First, a clockwise turn:

Next up, counter-clockwise! (what a great surprise, right?)

It seems other rotary encoders might behave differently. Some may have a push-button functionality as well. But they are kind of cool, don’t you think?!?